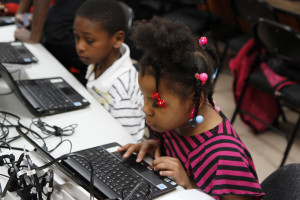 Principals in Stem k-12 represent the convergence of experience and expertise in STEM education, including college level and beyond; recognition of the importance of STEM skills in the job market and among 21st-century entrepreneurs, cause-marketing, networking, and developing community-based businesses.

The project was developed to provide information and interventions that address a travesty in education – the abysmal performance of our Black children on math, science, and reading national tests.

Here’s a bird’s eye view of the problem

There are a few things that make excellence in STEM an important issue for all young people in the U.S.  A 2009 Program for International Student Assessment, the U.S. rated 24th (in the world) in math and 17th in science.

Although overall performance by U.S. students is startling and troublesome, studies of performance within the U.S. show a much more troubling situation for Black students. Our students perform more poorly in STEM than all other groups.

Here’s what the statistics show about how Black students compared to other groups on the ACT test (America College Testing) for the period 2010-2014.   This is important because most colleges use ACT scores as one of the considerations for admission.  Records show that low ACT scores indicate that students will probably do poorly in entry level college level  courses associated.   Poor scores will keep students out of most colleges.  Students may gain admittance to some schools with marginal ACT scores, but they will be placed on a special track, and given remedial work. They won’t even be considered as a potential STEM major because it is assumed that they will fail. 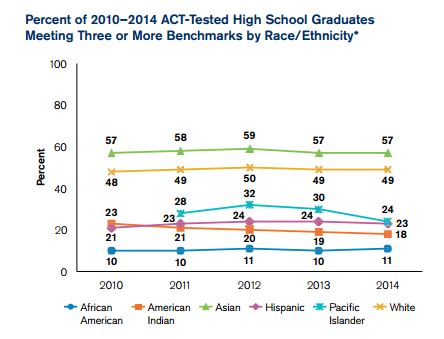 The blue line in the chart above represents Black students who met ACT benchmarks in at least three areas (science, math, English, Reading).

This is what average ACT scores look like, by subject, and ethnicity, among 2014 high school graduates. 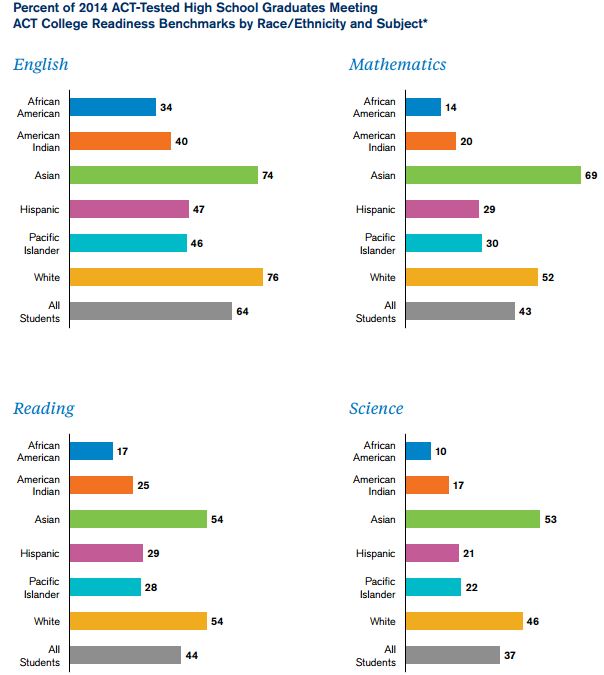 Why should Black parents care?  Jobs.  Money.  The ability to create new and exciting innovations. If our children are unprepared to get into college, and/or unable to even consider majoring in a STEM discipline because they are unprepared for success, they will be edged out of the most lucrative jobs of the future.

It is estimated that 80% of jobs during the next decade will require STEM skills.  People with these skills will be hired into the jobs.  STEM-based jobs pay better than most other job categories.  It does not take a genius to see that if our children are encouraged to shy away from STEM courses, they will continue to be at the bottom of the hiring line, as well as the earnings line.

As parents, guardians, kinfolk, and concerned citizens, we need to take up the mantle of re-educating our children.  No need to freak out because you were encouraged to hate math and science and stopped reading because it was easier to watch the video.  We’ve got you covered.  We have help here at this site.  However, what we cannot bring to the table is care and concern for our children’s future.  You have to bring that.

Our aim is to provide information and resources that ensure that our children are prepared to become the STEM experts and innovators of tomorrow.